Have Fun With a 3D Horse!

You are here:
Things to Make & Do

Have you ever imagined having a horse or pony in your home? Do you like using technology in creative ways? Using a cell phone, Google’s 3D animal feature allows you to place augmented reality (AR) animals wherever you want—even in your own home! 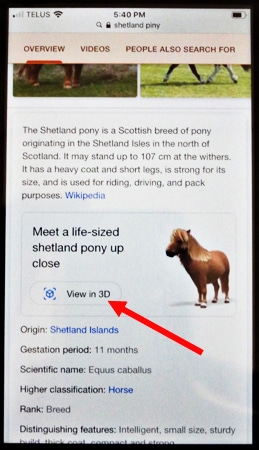 Currently there are 33 animals to choose from, including a 3D horse and a 3D Shetland pony!

What is augmented reality?

Augmented reality is any system that has these three basic features:

3D refers to a shape or object that has three dimensions – length, width and height.

What Android phones support ‘view in your space’ for Google 3D animals?

While just about all phones will support the ability to View in 3D, not all devices support the View in your space feature. That’s the feature that allows you to make the animals appear as if they’re in your world when viewed with your phone’s camera.

For you to use the View in your space feature for 3D animals, you have to have a phone or other device that is compatible. At the moment, only phones that support Google’s ARCore allow you to see the 3D animals using augmented reality in your home.

Another possible tech issue will be encountered by those with iphones. For some reason, Google has not enabled the sounds for each animal when using an iphone. You can see the animals and they will move, but you can’t hear them.

How to Make a 3D Horse or Shetland pony Appear

Taking a Photo or Video

After the animal appears you can still move them around and resize them. Have fun experimenting with different orientations. See if you can get the pony to interact with objects in the room. A friend can stand near the pony and appear to pet her or offer a treat. You could hold grooming tools in your hands and pretend to groom the pony.

Here’s a brief video with sound to inspire you. Have fun making your own!

Tour the National Cowgirl Museum and Hall of Fame
January 26, 2023