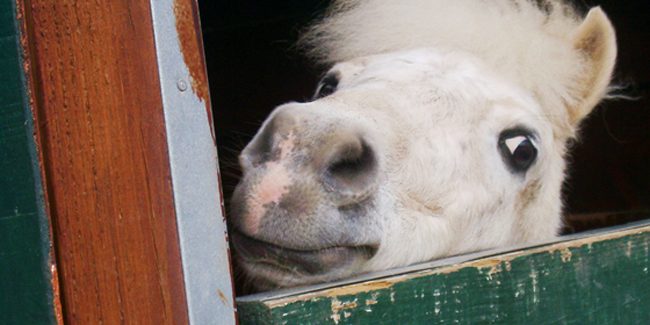 Several years ago, people at Ebony Horse Club in the UK, sought help after noticing how frustrated their Shetland pony Pedro was when he tried to see eye-to-eye with visitors. Standing at just 8 hands tall, Pedro struggled to see out over his stall door when he first arrived at the horse club.

1. What is Pedro’s height in centimetres?

2. What is Pedro’s height in inches? 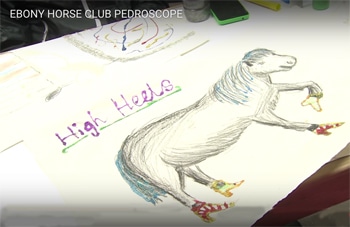 Given the challenge of creating something to help Pedro see over his door, kids at the club came up with different ideas. One girl thought of attaching large helium balloons to give the pony a lift, another designed four individual high heel shoes that could be fitted to Pedro’s hooves. Once all the ideas were collected, a vote was held. And the winning idea was—a periscope!

Science Talk – periscope: A periscope works on the Laws of Reflection. The light from the object falls on one mirror (placed at 45° to the object) and is reflected. This reflected light in turn falls on another mirror and is again reflected until it reaches the eye, in this case, Pedro’s. 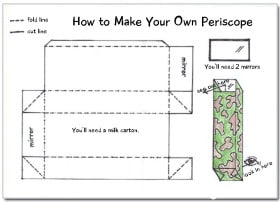 Andy Morris, owner of Print and Cut, said: “We got an email from the Ebony Horse Club who were asking for our help, it was so nice, and a little bit funny, that we decided to give it a go.”

Andy, 38, said: “The sketch was sent to us and then I turned it into a 3D sketch with some software, and then it was sent to be made. It was all quite easy, and we did it for free to help Pedro. 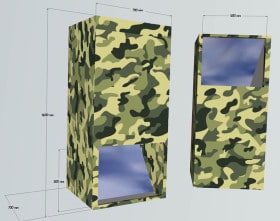 Gavin Hall, built the periscope, and being used to creating features for shop windows and banners, he was a little surprised when the job of building a periscope for a pony came through.

Gavin said: “It took me about three hours so it wasn’t too bad really, but it was a strange few hours working on a pony periscope.”

4. What is the height of Pedro’s periscope in cm?

5. What is the width of Pedro’s periscope in cm?

6. What are the dimensions of the mirror openings in metres?

7. What kind of quadrilateral is the opening?

When you are making a periscope, it’s important to make sure that the mirrors are positioned at 45-degree angles. 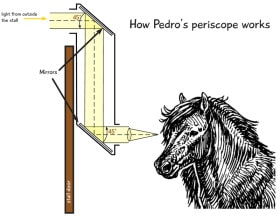 How does Pedro’s periscope work?

Here’s a great video telling the whole story. You’ll see Pedro, the people at his stable, the kids developing their designs, and then, of course, the Pedroscope!

7. What kind of quadrilateral is the opening?
Answer: Square. All four sides are the same length, and each interior angle is 90°.

Common Core:
4.MD.A.1 – Know relative sizes of measurement units within one system of units
4.MD.C.5 – Recognize angles as geometric shapes that are formed wherever two rays share a common endpoint, and understand concepts of angle measurement:
4.G.A.1 Draw points, lines, line segments, rays, angles (right, acute, obtuse), and perpendicular and parallel lines. Identify these in two-dimensional figures.
4.G.A.2 Classify two-dimensional figures based on the presence or absence of parallel or perpendicular lines, or the presence or absence of angles of a specified size.
5.MD.A.1 – Convert among different-sized standard measurement units within a given measurement system
5.G.B.4 Classify two-dimensional figures in a hierarchy based on properties.