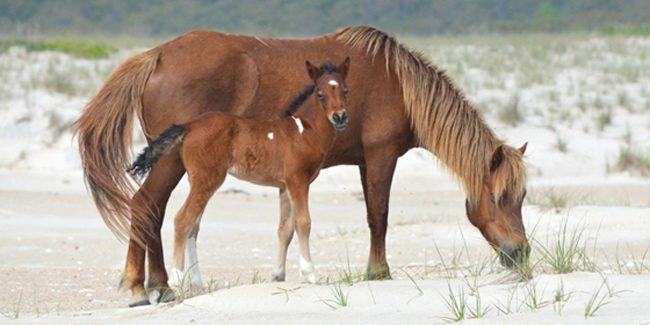 Each year, new foals are born on Assateague Island. Assateague Island National Seashore officials always make an announcement, and this spring was no different when the Maryland herd grew to 93 ponies with the birth of a bay pinto foal they named, N6BMT-FN.

Why is she called N6BMT-FN? Back in the 1970s, the National Park Service began naming new foals in the Assateague herd with an alphanumeric code. This code helps track the maternal ancestry of each individual pony. (Maternal ancestry refers to the mother’s family line.)

The system is named after researcher Dr. Ronald Keiper, and is now known as “Keiper numbers”.

Here’s how it works: at birth, each pony is assigned a Keiper number created by adding the letter for its birth year to its mother’s Keiper number. Birth years began in 1976 with A, B for foals born in 1977, C for 1978, up through Z in 2001. At that point the alphabet was started over with a dash in front of the letter, resulting in -A for foals born in 2002.

Pictures show the filly, a female with three white spots, is in good health, and she has been observed nursing as well. The filly’s mother is Jojo, her identification number is N6BMT-F. The father is likely Llama Boy, N6BMS, though now Jojo and the baby are part of General Harker’s (X16-A) band.

Using the chart above, trace the new foal’s maternal ancestry.

1. Which letter in the new foal’s Keiper number, N6BMT-FN, indicates the year she was born?

2. Her dam, Jojo, has the Keiper number N6BMT-F. In what year was she born?

4. What is the Keiper number for Jojo’s mother?

5. In what year was Jojo’s mother born?

6. What letter in Jojo’s Keiper number represents the year her granddam was born?

7. In the new foal’s maternal ancestry, what is the Keiper number for the first mare numbered back in 1975? 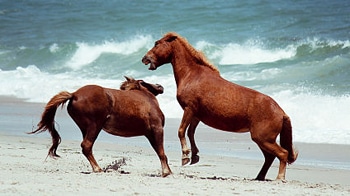 Mares frequently move from one band to another — a pony can be in one band in the morning, and a different one in the afternoon after a stallion fight.

Visitors to the island hoping to catch a glimpse of the new pony should be warned though — General Harker’s band can typically be found in the Over Sand Vehicle area, south of the developed portion of the park, out of viewing range for most people traveling in regular vehicles.

Would you like to learn more about Keiper numbers? Check out this post on HLM to find out what the ‘N6’ means at the beginning of Jojo and her new foal’s Keiper numbers. You’ll also get to practice interpreting another foals’s number just like the park rangers do on Assateague Island!

4. What is the Keiper number for Jojo’s mother?
Answer: N6BMT

7. In the new foal’s maternal ancestry, what is the Keiper number for the first mare numbered back in 1975?
Answer: N6

Photos:
Jojo and her new foal, Courtesy of National Park Service
Wild Ponies of Assateague Island by tramod; CC BY 2.0