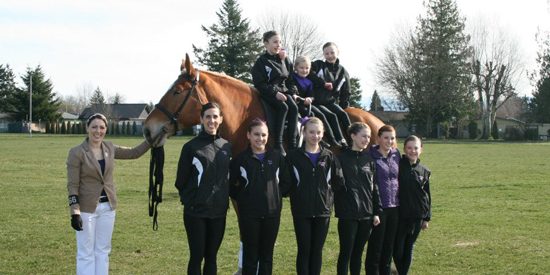 Above and Beyond is a vaulting team based in Washington State. In 2013, for the first time in the team’s history, they competed in Trot Team and C-Team events at the National Championships held in Denver, Colorado.

The championships ran from August 8 – 11th. The team’s trainer and coach, Saacha DeAmborossio, drove the horses all the way to Denver. When you travel with horses, you need to know how to read a map. Saacha’s total time on the road was 28 hours. Let’s see how far they went. 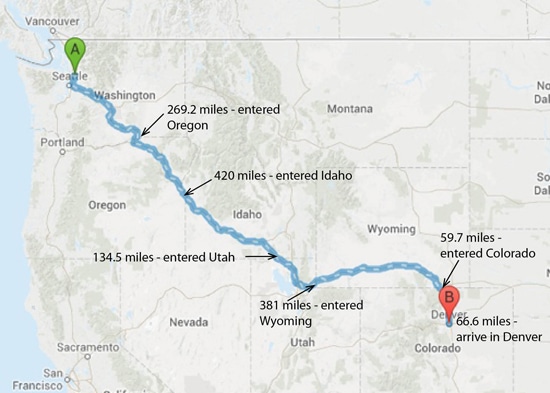 The map above shows the route Saacha took. Distances between points are shown on the map.

1. How far is the drive from their home in Snohomish, Washington to Denver?

Of course, that’s just one way.  After the competition she had to turn around and drive all the way back.

2. How far was the entire round trip? 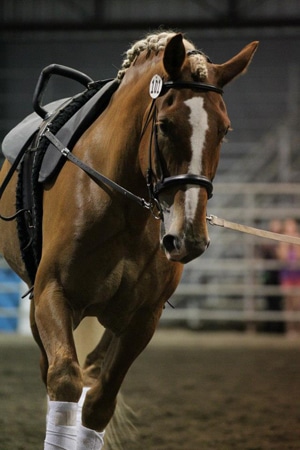 Both Curious George and Charles get 6 flakes of hay a day and eat 1 lb. of alfalfa/grass pellets.

Horse Talk – flake: Every square bale of hay is divided into flakes. Once the twine is cut that holds the bale together, the flakes are easy to see, like slices of bread.

An average bale of hay has 12 flakes of hay.

5. How many bales of hay are needed to feed Curious George and Charles for a week?

Vaulting is a growing equestrian sport that combines dance and gymnastics on a moving horse. The horse is lunged in a circle 15 to 25 meters in diameter.

Horse Talk – lungeing: Lungeing is performed on a large circle with the horse traveling around the outside edge of a real or imaginary ring with the trainer in the middle. Lunge can also be spelled ‘longe’. 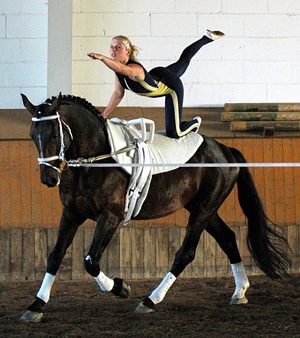 There are seven compulsory exercises in a vaulting routine. If you are interested in reading a detailed, illustrated description of each exercise click here, then click on the name of each exercise.

In one of the exercises, called the flag, the vaulter’s shoulders and hips must be held parallel to the ground.

6. Would this make a line drawn from the vaulter’s shoulders to their hips vertical or horizontal?

Another compulsory exercise is called the Mill. In the Mill, the vaulter makes a 360-degree turn on the horse’s back, in four evenly timed phases. 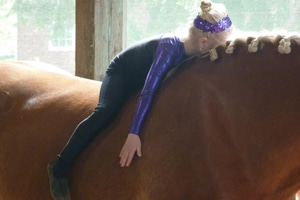 7. If a vaulter starts out looking forward, between the horse’s ears, in what direction will they be looking once they’ve completed the exercise?

Each one of the four phases takes four canter strides to complete.

8. How many strides does it take to complete the Mill movement?

How did the team do in Denver? The Above and Beyond Vaulters club won the C divisions team championship!

Do you want to see what it takes to be a vaulter? Check out the Above and Beyond Vaulting team training hard and having fun – and – see Curious George and Charles in action!

6. Would this make a line drawn from the vaulter’s shoulders to their hips vertical or horizontal?
Answer: horizontal

8. How many strides does it take to complete the Mill movement?
Answer: 4 x 4 = 16. A horse takes 16 full canter strides in the time it takes the vaulter to perform 1 complete Mill movement.