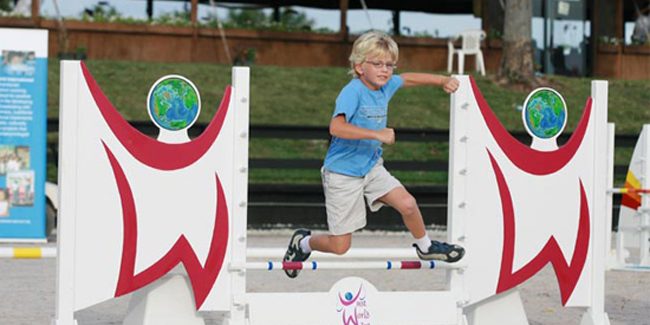 A horseless horse show is an event that allows children and adults to gallop over a course of miniature jumps, imitating the 1,000-pound animals and top riders they idolize.

The participants pay an entry fee and the money goes to the organizer, Just World International, a great cause helping children in impoverished communities around the world.

The young competitors are judged just as horse and rider teams would be in standard show jumping classes—placing according to speed or the time taken to complete a given course. The fastest time wins, but penalties are incurred for faults such as knocking down a rail. 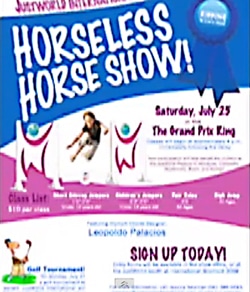 1. In show jumping classes horse and rider teams receive 4 faults for knocking down a rail. How many rails would a competitor have to knock down to receive 12 faults in a horseless horse show?

Nearly 20 horseless shows are staged each year in Europe, Central America, Canada and the U.S., with the number of competitors at each typically ranging between 40 and 130.

2. What is the average number of competitors at each event?

Denise and Katie Quirk, sisters who have been involved with JustWorld since its founding in 2003, came up with the idea for the horseless events. “We watched the kids do it at home and even wandering around the barn,” Katie Quirk says. “We would see the kids practicing everywhere we went.”

Participants on the circuit range from 3-year-olds to adults; the most competitive are between the ages of 9 and 15.

To keep things official, JustWorld awards ribbons through at least sixth place—and sometimes to 10th or 12th place. Each show can raise thousands for the organization.

At the Hampton Classic Horse Show in Bridgehampton, N.Y., the horseless portion of the event drew more than 100 entrants. Young riders, their non-riding siblings and spectators flocked to the ring set up with miniature versions of jumps.

To lend a touch of authenticity to the spectacle, some enthusiasts go so far as to strap on horse boots—gear that four-legged show-jumpers wear to protect their legs. 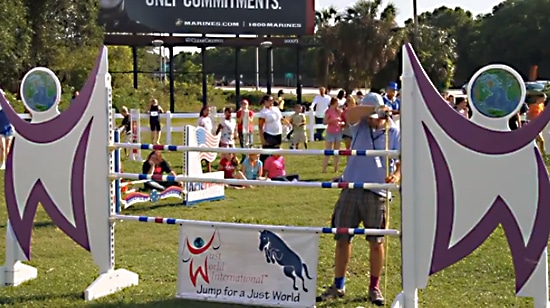 Measuring the height of the jump.

In the pairs class, where two competitors at a time are put through their paces, teams had to navigate a course of jumps—ranging from 18 inches to 2 feet in height—as fast as they can without knocking down any rails.

At the American Gold Cup event this past year, Jane Strauss, 10, won the horseless high-jump competition, with a jump of 1.28m. “This was my first time in the high jump,” she said, although she practices in her yard at home with jumps purchased from a tack shop. “It’s fun to compete and practice for the show.”

4. How much higher did Alejandro Karolyi jump than Jane?

The horseless horse show at the European Pony Championships drew between 80 and 90 competitors. Why? “It’s just fun to be a horse,” answered a competitor.

Check out a Just World’s Horseless Horse Show that took place in Bromont:

1. In show jumping classes horse and rider teams receive 4 faults for knocking down a rail. How many rails would a competitor have to knock down to receive 12 faults?
Answer: 12 ÷ 4 = 3. Competitors would have to knock down 3 rails.