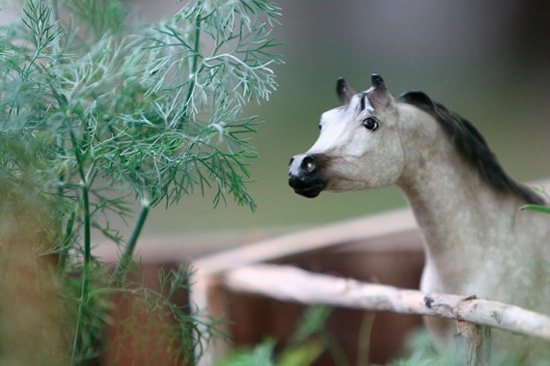 The fourth annual Model Horse Show at Gloucester County College drew model horse collectors from as far as Texas and Indiana, and raised nearly $1,500 in scholarship funds for students enrolled in the school’s equine science program.

“It’s a large hobby that not a lot of people outside the community know about,” said show founder Lisa Smalley, who owns her own real horse back home, and has been collecting model horses since 1987. “I was a student here for business administration, and they had just started the equine program, and, having my own horse, I thought it was fantastic.

1. How long has Lisa been collecting model horses?

“I had to fund my own way through college, so this is my way of helping others through school.”

According to Smalley, the $1,500 fund, amassed through the show’s entrance fee and silent auction, will benefit three equine science students in the 2013-14 school year. 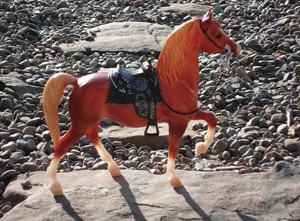 There was no prize money — just bragging rights and, for the top two finishers in each class, a chance to take their collection to the national competition next year in Harrisburg, Pa.

“I’ve been collecting for 20 years now, but only showing for a couple months now,” said Kristen Moreland, from Maryland by way of Flemington, N.J.

“I grew up on a horse farm, and I still take weekly lessons, but I can’t afford my own,” she said. “This is sort of my way of staying involved in horses.”

Alyssa Shoemaker estimates she’s been to 2,000 shows over the past 16 years. She holds five national championships and five top 10s, and her sights are firmly set on Harrisburg.

4. Assuming Alyssa attended the same number of shows each year, how many shows per year did she attend?

“I was born with a love of horses; I had an affinity for them as a child,” Alyssa said. “At the shows, winning means getting the esteem of your peers, and it adds value to the horse.

While many of the entrants were veterans of the competition scene, some admitted they came out just for the fun of meeting people with the same passion.

“It’s my first time here — I just like fun I have at shows,” said 18-year-old Allison Pelke, from Yardville, accompanied by her grandmother. “But it’s also fun to get a ribbon.”

Would you like to find out more about showing model horses?