Morgan Gets Third at Dressage at Devon 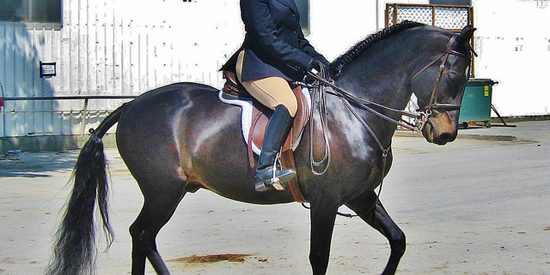 Dressage is a popular international equestrian sport. It is one of the Olympic equestrian events and is considered to be the highest expression of horse training.  Sometimes it’s been called dancing on horseback. 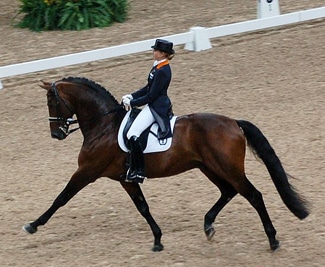 A Dutch Warmblood stallion performing dressage at the World Cup.

One of the top international dressage shows in the U.S. is Dressage at Devon. It is held each year in September at the Devon Horse Show grounds in Devon, Pennsylvania. At these shows you expect to see the most popular dressage horse breeds, breeds like Hanoverians, Oldenburgs, Andalusians and Dutch Warmbloods. What you don’t expect to find is a Morgan competing in an international dressage event.

At this year’s show, competing in a Fourth Level Test of Choice class, was a 14.1-hand Morgan pony named Avatar’s Jazzman. He was at least 12 inches smaller than any of the other horses in the class!

Not only did he compete, he and rider Lauren Chumley of Flemington, N.J., earned a place in the top six and will be going on to the U.S. Dressage Federation Championships in Kentucky this November! 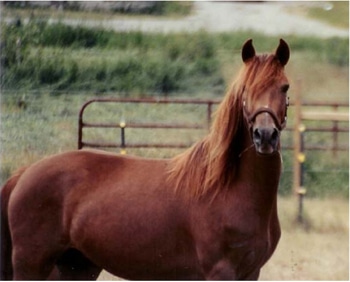 Morgans are known to be versatile, but placing so well in an international dressage event is highly unusual.

All Morgans trace back to a single foundation sire, a stallion named Figure, who was born in West Springfield, Massachusetts in 1789. His ability to outwalk, outtrot, outrun, and outpull other horses were legendary.

2. In what century was Figure born?

3. How many years ago was Figure born?

Jazzman is a perfect example of Morgan versatility, not only does he compete in dressage, shortly after the show at Devon, Lauren took him to an eventing competition, has hunter-paced him and also hopes to take him out hunting.

“He does it all,” said Lauren, who has shown him up through the levels. “Morgans do everything,” she commented proudly. 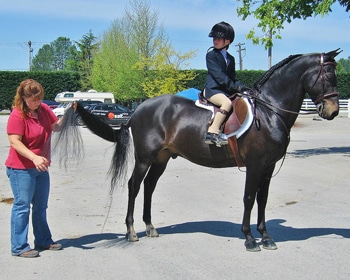 A young rider prepares for her class at the Key Classic Morgan Horse Show.

Is there prejudice against a little Morgan in the company of horses more typical of the Dressage at Devon standard? “Yes and no,” replied Lauren, who was marked at 61.625 percent in Jazzman’s ribbon-winning class. “It’s a little bit tougher because they (ponies) don’t move as big. They’re not as impressive in the ring as a 17-hand horse. It doesn’t bother me at this point. I have a really good time showing him.”

Let’s see how their score compared to the other top competitors. To score a dressage class you need to understand decimal numbers and place value otherwise you might place a horse and rider incorrectly! 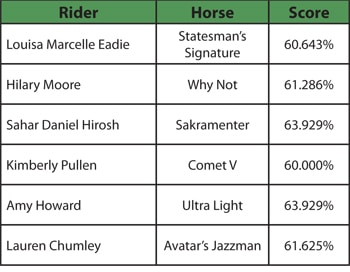 5. Louisa Marcelle Eadie and her horse, Statesman’s Signature scored 60.643%. What place value does the number ‘4’ hold?

7. Place the horses and riders in order of finish.

8. How many percentage points behind first place were Lauren and Jazzman?

Thirty-year-old Lauren Chumley, doesn’t have a lot of money. She drives a 12-year-old truck and acts as her own groom.

“I have rarely seen any person who is so driven to go out and succeed at `horse,’ ” said Michael Barisone, a dressage instructor and trainer in Long Valley. “There is no family backing, there is no trust fund, there are no wealthy sponsors buying her horses. Lauren will get on every single thing that anyone brings her and make it into a good horse,” he continued. “She’s so driven, she goes and goes and never stops.

As George Morris says, the good riders learn to ride the hide off anything that has four legs. And that is exactly what she does. “If Lauren calls up and says, `Can I have a lesson at 6 in the morning,’ I say, `pull the trailer into the yard’ and she will show up at 6. She’s dedicated, a super-hard worker and she’s a really, really good person.”

Good luck at the U.S. Dressage Federation Championships in Kentucky is November Lauren and Jazzman!

If you would like to read more about Lauren and Jazzman and see pictures of them in competition and at the barn, click [button link=”http://www.nj.com/sports/njsports/index.ssf/2014/09/a_little_morgan_stands_out_among_the_warmbloods_at.html”]here[/button]

Morgan Pony Gets Third at Dressage at Devon – Answers:

2. In what century was Figure born?
Answer: Figure was born in the 18th century.

4. Lauren and Jazzman received a good score. What place value does the number ‘5’ hold in their score?
Answer: Thousandths