Mustang Gals to the Rescue 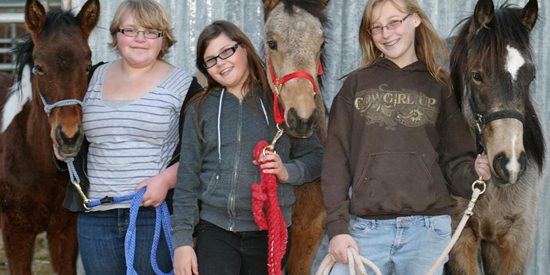 Three students from Las Vegas, Nevada were moved by the plight of mustangs in the United States and vowed to do something about it.

Gabby Beck, Robin Warren, and Emma Woyak, members of the Youths’ Equine Alliance and collectively known as the “Mustang Gals,” began actively promoting a campaign they called, “The Great American Mustang Exodus” through social networking.  Together they hoped to inspire as many people as possible to adopt a mustang and to work towards stopping any future mustang roundups. 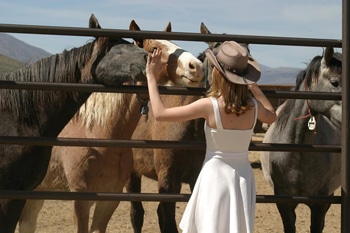 The girls gave themselves a deadline for their campaign, the pledges for adoption had to be received by April 30th, 2014.

Early on, math played a key role in their effort to help mustangs. Robin explains:

“All the time in the middle of math class I hear kids say “is this going to help me later in life? Why do I need to know how to divide or to multiply?”

To those of you that wonder about this let me ask you this: do you want wild horses and burros to find their forever home? Math is something that will help you find out how.

“We found out that there are 2 million horse owners in America and 50,000 horses waiting to be adopted. When we compared how many horses need homes to the number of people who already own horses we first came up with a ratio that looked like “50,000 : 2,000,000.”

Math Talk – ratio: A ratio shows the relative sizes or amounts of two or more values. It may be written as 3 : 4 (read as ‘3 to 4’) or as a fraction 3/4. The two values we are going to look at in this post are the number of horses and the number of horse owners.

The girls realized these numbers were big and hard to understand. They needed to simplify the expression.

1. What was the ratio of horses to horse owners once the girls simplified these numbers?

Robin said that the first ratio was difficult to picture but once they had simplified it to smaller numbers it was easier to picture.

2. In words, explain what this math ratio tells you. 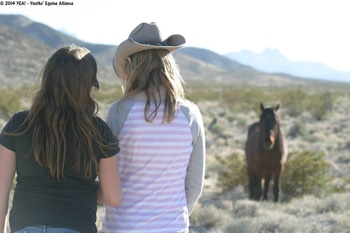 At last count, there were captive mustangs in 3 holding facilities in Nevada.The one most people hear about: Palomino Valley was home to 1808. The one that is closed to the public: Broken Arrow was home to 2437 and the prison facility, where they train horses, Carson City, was home to 1508.

3. How many mustangs are being held captive in Nevada? Write your answer in word form. 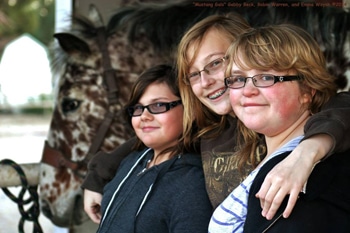 The Mustang Gals wanted to find homes for every one of these horses and burros. As the girls continued their research, they found that even though 50,000 horses are stuck in holding facilities throughout the entire US, not all of them are available for adoption! Some of them, once transferred to long-term holding facilities, can no longer be adopted.

So, for their campaign, the girls chose to focus on the horses in their state that they knew could be adopted. They rounded the number of horses available for adoption in their state of Nevada to 5,750 then used the same ratio method to arrive at “5,750 : 2,000,000.”

Once again they simplified.

4. What was the ratio the Mustang Gals first came up with when they simplified this ratio? 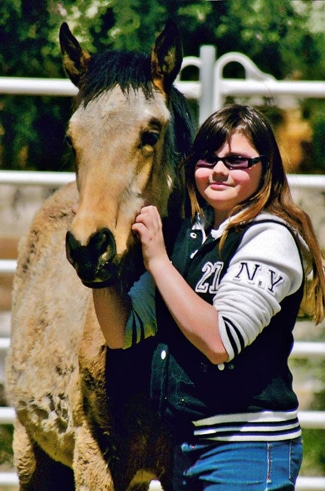 Gaby with her colt Ikey the buckskin.

The resulting ratio didn’t come out quite so neat and clean. The girls weren’t satisfied. It is hard to get your message out to people when the numbers you are using to convince them are hard to relate to, so, they experimented with rounding the numbers.

5. What was the ratio after they rounded the second number to the nearest 1000?

6. How would you speak this ratio out loud?

All the adopters promise to complete the adoption process by December 31st, 2014. So far 67 people have pledged to adopt. The girls did not reach their goal.

7. How many more of the Nevada horses are still waiting for adoption? Give your answer in word form. 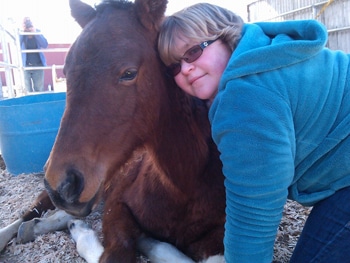 The Mustang Gals won’t know how many people will follow through with their adoptions until the end of this year. So far a foal and 2 burros – a total of 3 – have had their adoptions completed. The girls also helped find homes for 7 other horses.

Can the Mustang Gals really make a difference for the horses in holding? According to their own calculations, if just 3 horse owners out of every 1,000 could take on the responsibility and reward of caring for a horse or burro then together they could change the face and direction of how the Bureau of Land Management manages wild horse herds.

If just one horse gets adopted due to their efforts? Then they have changed the entire world for a wild horse — and for these girls, that means a lot.

Are you interested in finding out more about wild horses in the US? Click here for one of the Mustang Gals’ favourite sites for information about mustangs.

Mustang Gals to the Rescue Answers:

2. In words, explain what this math ratio tells you.
Answer: The ratio tells us that that there is one adoptable horse for every 40 current horse owners in the US.

4.OA.A.3 rounding
4.NBT.B.4 Fluently add and subtract multi-digit whole numbers using the standard algorithm.
6.RP.A.1 Understand the concept of a ratio and use ratio language to describe a ratio relationship between two quantities.

Photos:
All photos courtesy of the Mustang Gals