Jockey Rosie Napravnik closed out a career-best season in 2012, securing the highest spot ever for a female jockey on the North American leader board.

Finishing the year with $12,451,713 in purse earnings and 193 wins with 191 seconds and 167 thirds from 1,200 starts, Napravnik finished eighth among the top jockeys in the nation in the year-end standings. Hall of Fame jockey Julie Krone set the record in 1988 when she finished the year with a ninth-place finish. She finished ninth again in 1992 and the record stood for 20 years.

2. How many times did Rosie place in the top three finishers?

Napravnik won her second consecutive meet title at Fair Grounds Race Course & Slots in March and made history in May when she won the Kentucky Oaks (gr. I) aboard Believe You Can, becoming the first female rider in the race’s 138-year history to do so. 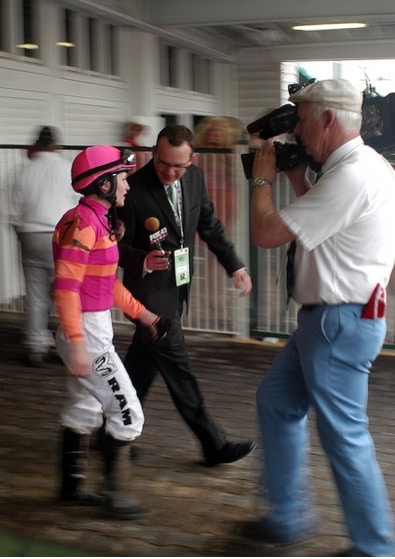 Pants on Fire’s jockey, Rosie Napravnik, gives an interview after the Kentucky Derby on May 7, 2011.

3. The top jockey in the year-end standings was Ramon A, Dominguez. He had 1,398 starts. How many more horses did he ride than Rosie?

“It is pretty obvious that Rosie lays down the numbers,” Krone said in a release. “What fun it has been to watch her year unfold. She is in new territory—being one of the top ten jockeys in the USA. My heart gets to racing at the thought of her winning the Kentucky Derby (gr. I).”

“Her tactical savvy in a race is as good as they come,” Krone continued. “Her gift of the feel or touch for the Thoroughbred is remarkable.

“This year has been unbelievable,” Napravnik said in a statement. “I’m very grateful to my supporters and to all of the people who have given me the opportunities to get to this level. I have continued to learn and have grown as a rider and I thrive on the challenges that come from competing against the best in the game. I’ve had the chance to work with some of the best horsemen in the business and I feel privileged to have ridden some incredibly talented horses in 2012. I’m excitedly looking forward to what’s to come in the New Year!”