“Other jockeys might underestimate my ability to be aggressive in a race,” says Napravnik, a 25-year-old who leads all jockeys in wins this year. “Until they ride with me. Then they’re like, ‘Ohhhh, OK.'”

A reporter asked, ‘How does it feel to be young and rich?'” Rosie recalls. “I had to correct him and tell him I didn’t really get to keep all $12 million in earnings last year.” (Jockeys typically get 10 percent.)

1. How much did Rosie earn last year?

2. Write this number in expanded form. 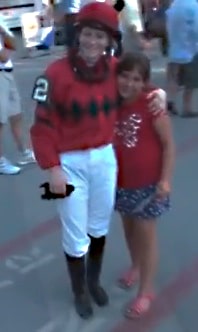 Jockey Rosie Napravnik with a fan.

In mid-April, Napravnik accepted an offer to ride Louisiana Derby runner-up Mylute in the Kentucky Derby. She had ridden Mylute before to a 10 3/4-length victory in an allowance race at Fair Grounds in New Orleans.

3. One length equals 2.4 metres or 8 feet. How far was Rosie and Mylute ahead of the second place finisher? Give your answer in both metres and feet.

Napravnik first started planning to ride in Triple Crown races at age 7. She’d been on horses virtually all her life — her dad shoes horses, while her mom trains riders for show and jump events — but one day, Rosie says, she watched a tape of the horse racing documentary “Jewels of the Triple Crown” and was hooked. She ended up watching it so many times that she memorized the entire thing. “That’s when I knew I wanted to ride the flats,” she says.

4. Last year was Rosie’s first year in a Triple Crown Race. How many years did it take Rosie to realize her dream?

Now she is heading to Churchill Downs with more than 1,500 career wins.

“When she’s coming at you [on the track] we don’t say, ‘Here comes the girl,'” says veteran jockey Shaun Bridgmohan, who rode against Napravnik at Keeneland. “She’s a very good rider. She places horses in the right spot where they need to be.” 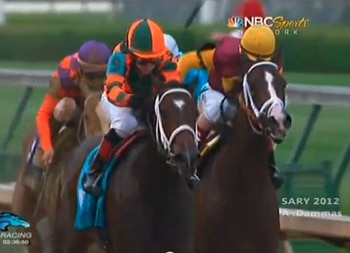 Rosie Napravnik and Believe You Can winning the Kentucky Oaks.

Hall of Fame jockey Mike Smith says the key to Napravnik’s success is her finesse. “She has great hands,” says Smith, who will run against Rosie at Churchill Downs aboard Blue Grass runner-up Palace Malice. “She gets a horse to relax and do what she wants it to do.”

That Saturday in May, 2013, the country watched as Napravnik tried again to become the first female jockey to win the Kentucky Derby. You can watch too!