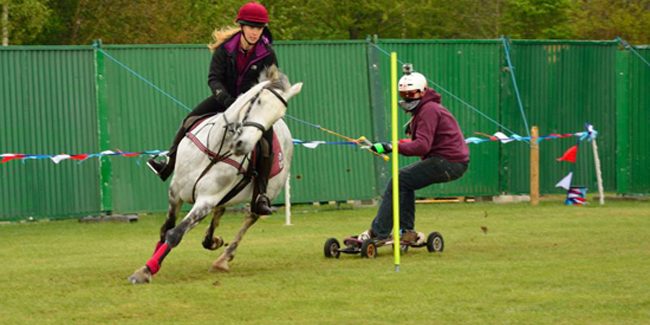 Have you ever heard of the equestrian sport of horseboarding? Don’t be surprised if you haven’t — it wasn’t even invented until 2004!

The idea came about when a young man named Daniel Fowler-Prime trained some horses for a friend. One afternoon, after the horse training was finished, his friend said, “Watch this,” and proceeded to tie a rope to the back of a car (driven by his sister), climb on to a mountain board and race around the field.

Afterwards, with the group standing around the mountain board, Dan was turning ideas over in his mind. “Could you tie it to the back of a motorbike?” he asked. “Can’t see why not” came the reply.

Dan looked at the board and then up at the stables, “Could you tie it to a horse?”

1. How many years has it been since Daniel first got the idea for horseboarding? 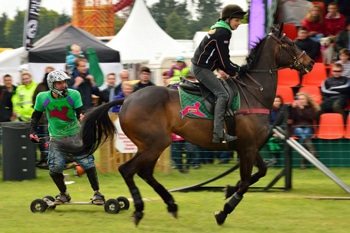 By the time this question popped into Dan’s mind, the light was fading and it was too late to answer the question that day. However, that question, along with others – How would the horse react?, Where would you attach it? What would it feel like? Would it be safe? – all stayed at the back of Dan’s mind until later in the year when the same brother and sister from that first “board towing” encounter came to visit at his home in Maidenhead, UK.

Then, as far as we know, for the very first time, a mountain board was attached to a horse. 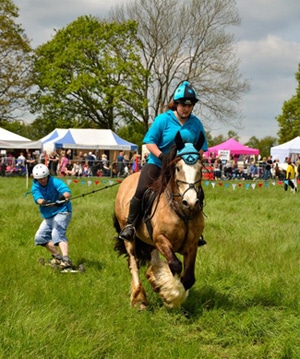 In the sport of horse boarding, the board rider is towed by holding a handle attached to a rope no longer than 10 meters in length, which in turn, is attached to the horse’s saddle by means of a small harness. There is no minimum length for the rope, but it must be long enough to prevent the board rider from being kicked by the horse’s hind legs while being towed.

2. What measurements would you need to take to calculate the minimum length for the rope to keep you a safe distance from the horse’s hind legs?

In horseboarding, the horse rider, their horse, and the board rider make up a team. The sport is a timed event where the teams compete against the clock around a course comprised of a series of gates that are 4 metres wide. There is a designated Start gate and Finish Gate.

The Novice league is designed to allow new teams to gain as much experience as possible and to develop their skills in maneuvering around the course in preparation for the Elite Class.

Math Talk – average or mean: a calculated “central” value of a set of numbers. To calculate: add up all the numbers, then divide by how many numbers there are.

Now, let’s check out the times and find out how fast they go! 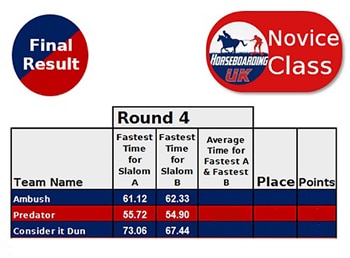 Novice results from the May 5, 2014 competition.

The table to the right shows results in seconds from the Novice Class at a recent competition.

3. The classes are timed to what fraction of a second?

4. What was team Predator’s mean time?

5. What was team Ambush’s mean time?

6. Calculate team Consider it Dun’s mean time and place the three teams in order of finish. 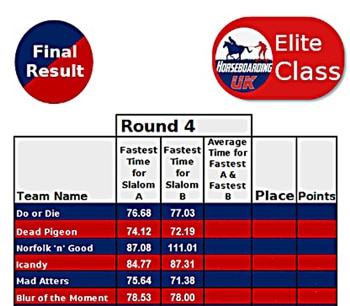 Now let’s look at results from a recent Elite class.

7. What would the final mean time be if team Icandy missed one gate and the board rider touched two gates?

8. Compare the finishing times and determine which team won the competition.

The National Championship is organized by Horseboarding UK and held annually each summer, at various venues with a number of rounds.

Here is a great video from a competition held in Sandringham showing footage from the rider’s and boarder’s perspectives too. They must have been competing while wearing head cams—very cool!

3. The classes are timed to what fraction of a second?
Answer: hundredths

So – team Dead Pigeon was the winner!

Common Core:
4.OA.A – Use the four operations with whole numbers to solve problems.
4.NF.C.7 – Compare two decimals to hundredths by reasoning about their size.
5.NBT.A.4 – Use place value understanding to round decimals to any place.
5.NBT.B – Perform operations with multi-digit whole numbers and with decimals to hundredths.
5.NBT.B.7 – Add, subtract, multiply, and divide decimals: word problems.
6.SP.B.5c – Calculate mean, median, mode, and range

Photos:
All photos courtesy of Horseboarding UK and their photographer Joe Beasant