Nosebands: How Tight is Too Tight? 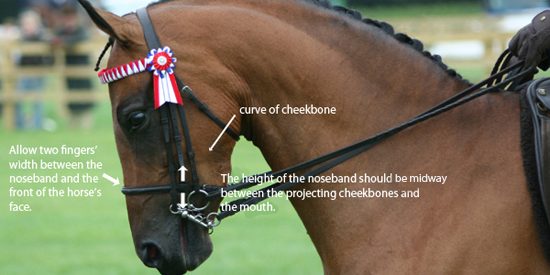 When learning how to bridle a horse and properly fit a noseband we are taught how to recognize the proper noseband pressure. The noseband should be buckled at a point that allows two fingers’ width between it and the front of the horse’s face. This allows the horse to open her mouth slightly and relax her jaw.

The height of the noseband should be adjusted so that it lies midway between the projecting cheekbones and the mouth.

Math Talk – midway: in the middle between two points; halfway

However, many riders believe the tighter they fasten a horse’s noseband, the more control they will have while riding. While this may be true, it does not address the cause of the problem when we simply strap a horse’s mouth shut. Not only that, new research shows tightening the noseband too much can also inflict pain and cause tissue damage.

Orla Doherty, Veterinary Behaviour Specialist, and her colleagues at the University College Dublin and the University of Limerick recently conducted a study measuring noseband pressures.

Science Talk – pressure: the amount of force acting on a specific area.

“Pressure applied by tight nosebands can restrict normal movements of the jaw, such as chewing or yawning, but the potential for damage to soft tissues, such as nerves, within the head is poorly understood,” Doherty said. “We’re measuring pressure so we can hopefully set safe (noseband tightness) guidelines. This will help to protect the welfare of the ridden. We will also hopefully help improve horse and rider safety, as horses in pain are more likely to display flight or fear responses such as head-tossing, bolting, etc.”

As part of their background research, Doherty and her team looked at the types of nosebands commonly in use. They evaluated 850 show jumping horses, ranging from amateur to international level mounts, and found that only 20% wore simple cavesson nosebands (like the one pictured above).

1. How many of the horses wore simple cavesson nosebands? 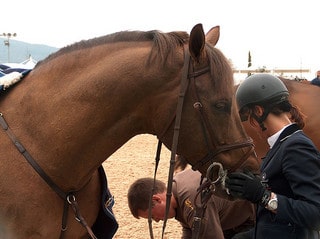 The remaining 80% wore flash (which features a second strap running from the cavesson around the nose in front of the bit and under the chin groove), grackle (also known as a figure-eight, which crosses from the top of one cheek bone, over the nose to the chin groove on the other side, under the horse’s chin, and back up to the opposite cheekbone), or other nosebands.

2. How many of the horses wore flash or grackle nosebands? Show two ways to calculate the answer.

Doherty’s team was also interested in how tight riders were fastening these nosebands. They evaluated 140 young (4- to 5-year-old) event horses, 10 Irish Drafts, and 50 Connemara ponies competing over a cross country course and found that only 12% wore nosebands loose enough to fit two fingers underneath. Forty-seven percent had nosebands too tight to fit any fingers beneath.

3. How many horses did they evaluate altogether?

4. Out of all the horses how many wore nosebands loose enough to fit two fingers underneath?

5. How many of the horses wore nosebands too tight to fit any fingers beneath?

6. How many horses in the test group are not accounted for with these two statistics? Where might they fit in on the noseband tightness scale? 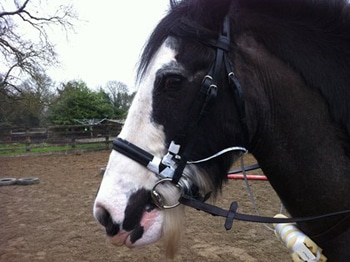 To investigate possible pressures exerted by tight nosebands Doherty and her colleagues have developed two pressure detection systems: one to measure noseband tension and nose curvature and another to measure direct pressure on the horse’s nose.

Upon viewing the results of this first system, Doherty said, “We got a rhythmic peaking of force measurements (the pressure was at its highest point) as the horse chewed—so every time he opens his mouth, the noseband is being stretched.”

Science Talk – force: the capacity to do work or cause physical change

She also observed a rhythmic peaking of force with each stride, particularly into an upward canter transition.

In the second approach, the team put the same horse through some simple ridden exercises involving both flatwork and jumping. Again, they saw rhythmic peaks in pressure, but noted an alarming set of peaks during transitions, turns, and when the horse jumped.

“These peaks are of interest as they may result in discomfort and possibly pain during certain ridden events,” Doherty explained. “Horse welfare and horse and rider safety may be at risk if the horse is subjected to pressure peaks which she can neither control nor escape.”

Do you have horsey questions you are curious about? If you were an equine research scientist what would you like to investigate?