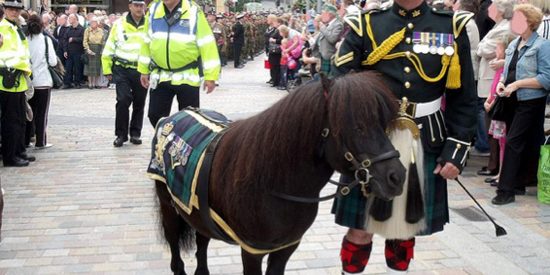 A 23-year-old Shetland pony, who has taken part in dozens of military parades as the Royal Regiment of Scotland mascot and is a favourite of the Queen, has retired after 19 years of service.

The Queen always requested that Cruachan III, who stands just 91cm tall, be present at any parades when she visited her Scottish holiday home, Balmoral.

2. How many years did the first Cruachan serve as a mascot?

3. How many years did Cruachan II serve as mascot?

4. How many years did Cruachan III serve as mascot?

5. How much longer did Cruachan II serve than the other two ponies?

Captain Dougie McDougall said: “He’s done a lot of parades in his time and he was a real favourite of the Queen. If she was ever on holiday and knew Cruachan was around she would make sure he was there on the day that she arrived. She loves him to bits.

Cruachan III lives in Redford Barracks, Edinburgh, Scotland, with a companion Shetland pony called Islay. Both are looked after by a Pony Major, whose duties include their welfare and leading Cruachan III during his many appearances at Highland games, fairs and military parades.

The regiment are now looking forward to welcoming his replacement – Cruachan IV.

Would you like to see more photos of Cruachan III and read the original article?