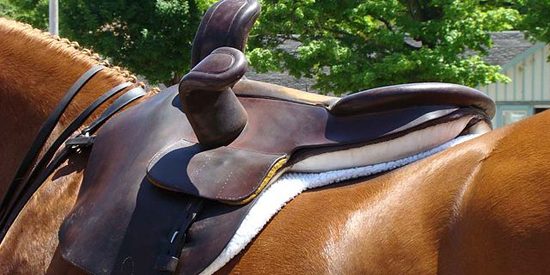 A new world side saddle high jump record was set in 2012 at the National Showing and Showjumping Show in Aintree, England.

Susan Oakes traveled all the way from County Meade in Northern Ireland to Aintree to take part in the competition. Riding Brandy And Red, she jumped 5ft 9in to set a new side saddle high jump record.

The previous record was set by Carolyn Wofford, who cleared 5ft 7in in 1995.

1. How many years did Carolyn’s record stand?

2. How much higher did Susan and Brandy And Red jump in setting a new record?

Emma Brown and her horse French Connection NJ (his stable name is Harry) placed second when they cleared 5ft 3in.

3. How much higher did Susan jump than Emma to win the competition?

While Susan has ridden all her life and rides side-saddle on the hunting field and showing ring, she had never tried her hand over show jumps. 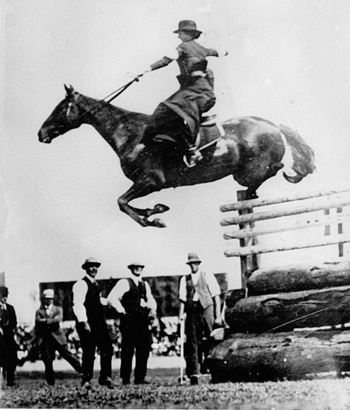 Mrs Esther Stace, from Yarrowitch, riding sidesaddle and clearing a record 6’6″ at the Sydney Royal Show.

“I saw an entry from for the Leaping Lady competition, which said: ‘Are you brave enough? There was a picture of the women who set the original record back in 1915, and I just thought I’d have a go, so I started looking for a show jumper,” Susan said.

“Atlas was supposed to be my main ride at Aintree, but he went lame two days before the show so I ended up jumping Brandy And Red, who I’d only ridden three times before,” Susan said.

It certainly didn’t hold them back, even though they couldn’t quite match a jump record set in 1915 of 6ft 6in by Australian rider Esther Stace.

“I intend to break my own record in October in Ballinsloe,” Susan said. “I’m aiming to jump 6.6ft over the triple bar on Brandy and at least 6.2ft on Atlas over the wall. Jumping that height is an amazing feeling.”

Susan entered the puissance at the Dublin International show in August last year, where she was the first person to ever compete in the class riding side-saddle. However, she said that Brandy was “a bit star struck and only jumped 1.40m”.

Horse Talk – puissance: the high-jump competition in the equestrian sport of show jumping.

The 29-year-old seems to feel no fear and has complete faith in her horses. “I’ve no problem going over 7ft on Atlas,” she said, although she admits jumping side-saddle does have it draw backs.

“It’s very difficult to see a stride when you’re riding side-saddle,” she said. “I have to walk my strides and put a marker down so that I know when to take off.

3. How much higher did Susan jump than Emma to win the competition?
Answer: 5ft 9in – 5ft 3in = 6in. Susan jumped 6in higher than Emma.