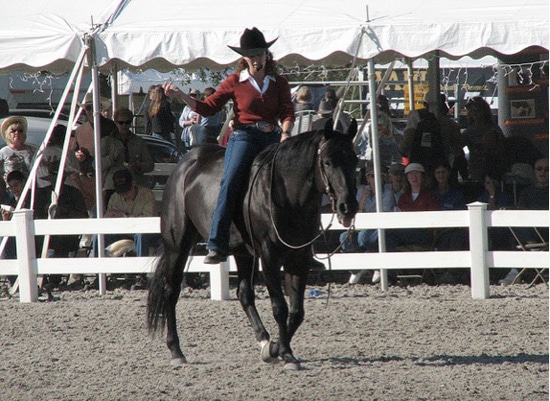 Stacy Glidden Westfall, grew up in Maine. She got her first horse, Misty, when she was just 6 years old. Today, at 37, Westfall is a nationally respected trainer of horses and their owners. She now lives in Ohio and will be inducted into the National Cowgirl Hall of Fame at a luncheon on Oct. 25.

1. Her first pony at 6 and now she’s 37, how many years has Stacey been working with horses?

Westfall competed in the Riverside Horse Show in Augusta and the Silver Spur Horse Show in Sidney when she was a girl. She did barrel racing, in which the rider tries to make the horse cut in opposite directions around three 55-gallon barrels set out in a triangular course in the fastest time without knocking any of the barrels over.

Standard barrel racing patterns call for a precise distance between the start line and the first barrel, from the first to the second barrel, and from the second to the third barrel. The pattern from every point of the cloverleaf will have a precisely measured distance from one point to the next.

Usually the established distances are as follows:

2. What is the total distance the horse and rider must race? 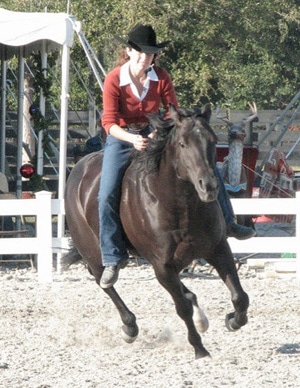 Westfall attended Erskine Academy, graduating in 1993. One day her mathematics teacher asked all his students to declare what they were going to do after high school.

Westfall said she wanted to do something with horses, but added, “You can’t go to college for that.”

Her teacher sent her to the guidance office, where she discovered that there were indeed colleges where one could study horsemanship.

The two leading colleges offering degrees in equestrian studies were Texas A & M and the University of Findlay in Findlay, Ohio.

Westfall chose the University of Findlay, because it was smaller and closer to home. She graduated in 1997 with a bachelor’s degree in equestrian studies and a concentration in equine business management.

Westfall moved from barrel racing, where she had been a champion, to freestyle reining competition, which she compares to freestyle ice skating.

“Reining competition shows the athletic ability of the horse that would be needed if it were herding cattle. I’m famous for my sliding stops and spins,” Westfall said.

She said there is pressure for freestyle reining to become an Olympic equestrian event. It is done in costume and to music, and has been called “Western dressage.” This year at the London Olympics, it was a demonstration event.

In 2006, Westfall’s father, Biff Glidden, died. A ride she performed in his memory created a sensation at the All American Quarter Horse Freestyle Competition. She and her horse Whizards Baby Doll won that competition with a high score of 239 and without using a bridle or a saddle. It was the highest score ever recorded, even by riders with a saddle and bridle.

Reining is an event judged on a horse’s willingness to be guided and controlled with little or no apparent resistance. Movements include speed control, circles, lead changes, stops, back, rollbacks and spins. Judges are looking for precision, technical application of natural aids and the rider’s ability to show a horse.

Riders are judged starting at a base score of 70 where points are added and subtracted from the base score. Western scoring for maneuvers is as follows: +1 1/2 = Excellent; +1 = Very Good; +1/2 = Good; 0 = Average; -1/2 = Insufficient; -1 = Bad, -1 1/2 = Very Bad. The final score is a collective mark. This score is based on the overall performance and effectiveness of the rider. Penalties can also be assessed for major, minor and severe errors.

3. Starting from the base score of 70 points, how many points did Stacy and her horse score to win the competition?

Also in 2006, Westfall was the first female to compete in the Road to the Horse competition; and she won it, beating all her male competitors.

This tests who can best “start” an untrained horse. She had a 3-year-old horse that had never been ridden and, “in three hours, I took the horse and had it drag a log, let me ride it and swing a rope overhead, walk over logs, walk, trot and lope, and ride over obstacles.”

Westfall has an uncanny ability to use body language to communicate with her horses.

“I’ve gone into places with horses that have never been trained and people say, ‘You’re a horse whisperer,'” like the character played by Robert Redford in the movie of the same name.

“It’s a little like knowing a spouse or a friend really well and walking into a room and knowing their demeanor right away,” she said. Watching the movements of a horse’s ears and nostrils is important to knowing how the horse is feeling, she said.

“I really, really enjoy teaching people,” Westfall said. “I can remember when I had trouble getting my horse into the trailer. Now I know how to fix that.”

“I am doing what I love,” she said. “The one thing I didn’t expect was the impact I’ve had on young girls. You really can follow your dreams. It’s been neat to be living that.”

Are you interested in finding out more about Stacy Westfall?