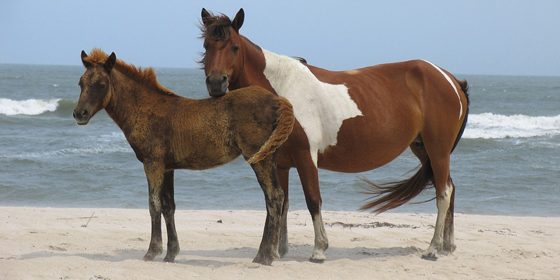 Caroline Butler of Keymar, Md., set her eyes on her dream pony –a red-and-white Chincoteague colt with a white diamond marking on his forehead. She began working to earn money by mowing grass and cleaning horse stalls.

The 15-year-old’s dreams came true this past summer when she placed the winning bid on a foal at the 87th annual swim and Assateague Pony Auction.

The love and spectacle of the rare breed brought Caroline and thousands of spectators to the auction located at the carnival grounds on Main Street. 67 foals were sold. In total, auction sales brought in $92,150 for the Chincoteague Volunteer Fire Company, which owns and maintains the ponies.

2. What was the mean selling price for a foal? 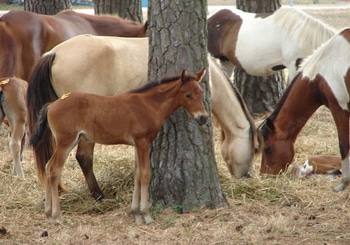 During their parade in front of bidders, several fillies and colts put up a fight, kicking up clouds of dirt as they reared back on the Saltwater Cowboys.

After 11 colorful foals were bought, a gentle “aw” from the crowd filled the auction arena as a tiny, pinto colt was escorted from the corral. The foal was a “fall pickup,” a pony too young to leave the care of its mother and would not leave its home on Assateague Island until Oct. 13.

“I thought he was really cute and I’ve always wanted a horse of my own,” said 9-year-old Jillian Ostrowske of Baltimore, who placed the winning bid on the colt at $1,150.

3. How much less than the mean price did Jillian pay for her foal?

Attendees at this year’s auction saw an assortment of colourful foals, several of which had red-and-white pinto coats.

A palomino filly with a white blaze received the highest bid of $7,200. The pony is a “buyback,” one of the best of stock that is released back onto Assateague Island with the remainder of the herd.

4. How much more than the mean price was the palomino filly? 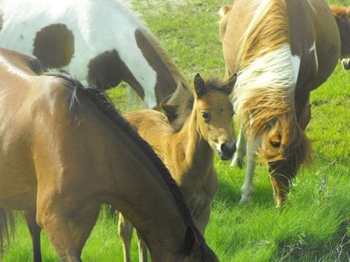 A foal feeds with its band of Chincoteague ponies off the Service Road at Chincoteague National Wildlife Refuge.

Owners of buyback animals receive a special plaque and get to name the pony.

In total, six buybacks were sold, including a filly that was bought by the fire company. All of the proceeds from the company’s purchase is going to the Wounded Warriors Project, a national organization that helps severely injured service members.

Earlier in the week, Caroline was devastated after her chosen colt was tagged to go back to Assateague Island.

But shortly after the foal stepped inside the auction arena, the Saltwater Cowboys removed his tag and he was eligible to leave his home.

For Caroline and fellow horse lovers who placed winning bids at the auction, that Thursday proved to be a day where dreams became a reality.

Would you like to watch a National Geographic video about the Pony Swim?