Woman Rides from Beijing to London 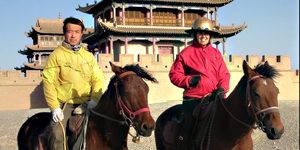 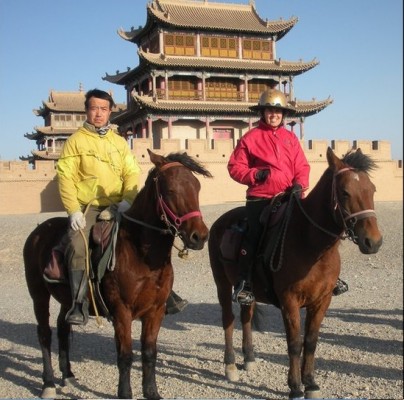 She’s slept inches away from scorpions and snakes, fended off attacks from wild stallions and broken her ribs and collarbone – all as part of an epic 10,000-mile long distance horseback ride.

But for West Wales pony breeder Megan Lewis, her four-year challenge to ride from the 2008 Beijing Olympics to the start of the 2012 Games in London is fulfilling a lifelong dream.

Megan started her epic trek in October 2008 from the end of the Great Wall of China where it reaches the sea at Shanhaiguan on the Chinese coast.

In China she suffered a three-month delay recovering from a fall from her horse but such setbacks were not going to hold Megan back from her dream.

1. What fraction of the entire trip had Megan travelled by June?

Megan has borrowed and traded horses for her journey including one she rescued from a meat market.

2. Megan traveled those 5,000 miles in 5 months of riding. What was her average distance per month?

“I’ve always been a rider and always wanted to do some sort of long ride,” she said.

Megan is riding 20 to 30 miles a day on her trip across Asia and Europe and is in the saddle for between six and eight hours. Her journey, dubbed the Long Horse Ride, is designed to promote good relations between Britain and China.

3. If Megan averages 25 miles a day, how many miles will she ride in a week?

4. On days where Megan rides for 8 hours and travels 30 miles, calculate her average speed in miles per hour.

Would you like to read more about Megan’s journey and see more pictures?

Check out Megan’s Long Horse Ride website and find out more about her ride.