Which Will It Be, a Bit or a Bitless Bridle? 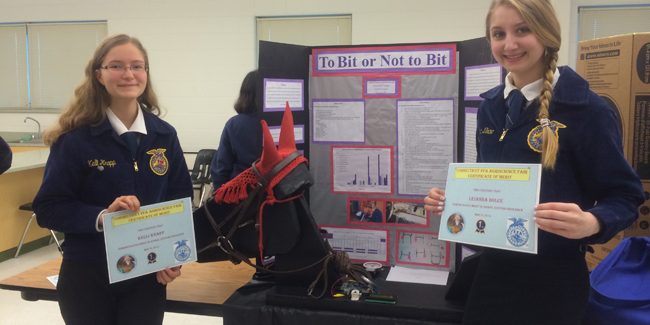 Have you ever bridled a horse? You have to be careful when sliding the bit into the horse’s mouth; you don’t want the hard metal of the bit bumping against the horse’s teeth. What does it feel like for the horse to wear a bit and have it pulling at the corners of their mouth and pressing on their gums? Two horse loving Connecticut high school students, Kelli Knapp and Leianna Dolce, had been thinking about this. When they were asked to do a science project at school they saw a perfect opportunity to investigate and compare horse bits—using math and science. 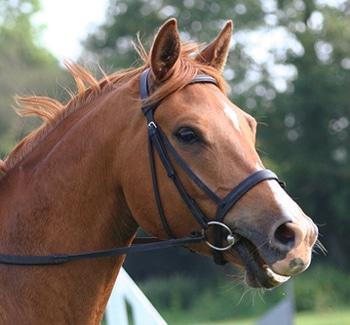 A horse wearing an English bridle with a snaffle bit and a cavesson noseband.

Many riders believe that, because of the amount of force applied by the bit, bits can cause damage to a horse’s mouth. In an effort to be more gentle, riders seek to find a bit that will apply the least amount of force but still give them the control they need. Is there a way of knowing how much force different kinds of bits make in our horse’s mouths?

The two friends developed an experiment to determine which kind of bit exerts the least amount of force to a horse’s mouth.

Science Talk – force: a push or pull upon an object. One branch of science called physics, defines force as the influence (this refers to the push or pull, in this case of the bit) that produces a change in a physical quantity.

1. Applying this definition, what is the ‘physical quantity’ in Kelli and Leianna’s science project?

In today’s equine community, the use of bits has become a controversial topic. Some people believe that bits are necessary to control the horse, while others believe that bits are inhumane and should not be used at all. Kelli and Leianna conducted their experiment in an attempt to determine the amount of force caused by seven different kinds of bits, as well as Dr. Cook’s Cross-Under Bitless Bridle, on multiple points in and around a horse’s mouth.

Side view showing Midnight, the electronic devises and the pulley. Click to enlarge.

For their experiment they built a realistic model of a horse head, mostly out of wood and clay. They even based their model on accurate measurements of a real horse skull! They named her Midnight.

Four electronic sensing devises were used to measure the amount of pressure being applied on specific areas in Midnight’s mouth. Kelli and Leianna attached the devises with a hot glue gun to the top of the nose, under the bridle’s noseband, the right bar of the mouth, the roof of the mouth, and the tongue.

Horse Talk – bar(s) of the mouth: the gum area between a horse’s front and back teeth.

Science Talk – pressure: You now know that force is a push or pull action between objects (in this case the bit and the horse’s mouth and nose). Pressure is a measure of force acting on a surface area of an object. In this case, the 20 pound weight acting on the bit, which in turn acts on the horse’s mouth. Pressure is force per unit area. In this experiment the units for pressure were measured in pounds per square inch. 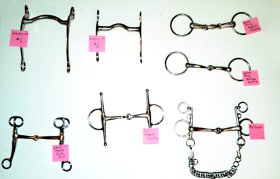 An English bridle, fitted with the first bit, was put on Midnight. The reins were tied in a knot and attached to a 20 lb. weight by a rope. The rope was lifted over the pulley (see picture below) and slowly released. When the weight was freely hanging, the data displayed on the screen was recorded in a logbook.

The process was repeated with all seven bits and the cross-under bitless bridle. 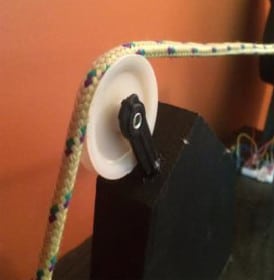 Close up of the pulley. 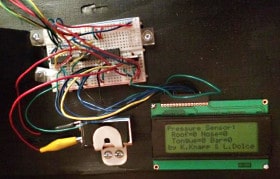 Let’s find out what they discovered.

3. Which bit exerted the most pressure on Midnight’s tongue?

4. Which bit exerted the least amount of pressure on her nose?

Math Talk – average: Calculating an average is easy to do. Just add up all the numbers, then divide by how many numbers there are. 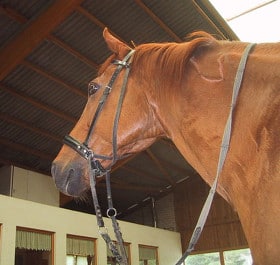 6. Did any of the bits, including the bitless bridle, put pressure on the roof of Midnight’s mouth?

7. The bitless bridle gave the highest pressure reading on which of the four locations?

9. Looking at the final column on the right, can you see how the Total Pressure (Averages) were calculated?

10. Calculate the Total Pressure (Averages) for the Full Cheek Snaffle and the Single Jointed O-Ring Snaffle. 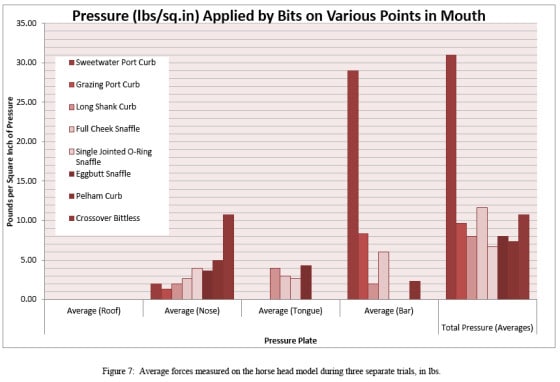 It’s not easy to compare and read the data in the table. Kelli and Leianna wanted to show their results in a more easily understandable way.

11. What kind of graph did they choose to display their results?

So, what does all this data tell us about bits, a bitless bridle, and the pressure they exert on a horse’s mouth and nose? That’s the final phase of any science project, interpreting the results and sharing those results with others. 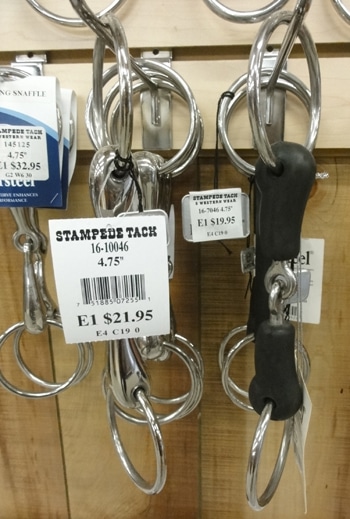 Science Talk – hypothosis: a possible explanation for an observation, phenomenon, or scientific problem that can be tested by further investigation.

From the data, the girls concluded that a single jointed snaffle bit is the best bit to use on your horse because it applies the least overall average force. This supports the first part of their hypothesis, but since the bitless bridle causes more overall force on average, the second part of the hypothesis is not supported.

During the experiment, the model horse’s mouth opened while testing the bits, which prevented the sensor on the roof of the mouth from registering any force. Did you wonder about the data results showing that none of the bits exerted pressure on the roof of the Midnight’s mouth? This might explain why. 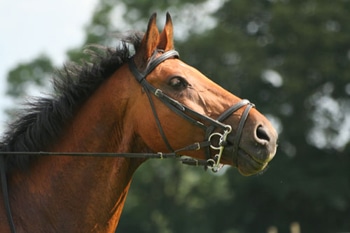 A flash noseband is sometimes used to strap a horse’s mouth shut, preventing them from opening their mouth to resist the bit.

In real life, some horses do open their mouths to avoid the force of the bit, but not all horses; some choose not to, and others are prevented from doing so by means of extra bridle straps.

Kelli and Leianna decided that for future experiments they’d need to fix the model horse’s ability to open its mouth. Opening the mouth is necessary in order to properly fit the bits to the model, but there should be more resistance from the mandible to help prevent the mouth from opening due to the force of the bit.

Another thing they want to address is the surface area of the sensors. The sensors used in this experiment had a surface area of about 0.3 cm2, which is too small an area to accurately represent the actual area on which a bit would create force in a horse’s mouth. As a result, there are large areas of the face where the pressure was not recorded.

If you had a chance to do a science project about horses what would you like to study? What would be your hypothesis?

To Bit or Not to Bit Answers:

1. Applying this definition, what is the ‘physical quantity’ in Kelli and Leianna’s science project?
Answer: The horse’s mouth and nose.

3. Which bit exerted the most pressure on Midnight’s tongue?
Answer: The eggbutt snaffle bit.

4. Which bit exerted the least amount of pressure on her nose?
Answer: The Grazing Port Curb bit.

6. Did any of the bits, including the bitless bridle, put pressure on the roof of Midnight’s mouth?
Answer: No.

Math Hint—Order of Operations: When you see things inside brackets, do them first.

11. What kind of graph did they choose to display their results?
Answer: They chose a vertical bar graph.

12. What is the name of the X-axis?
Answer: Pressure Plate

13. What is the name of the Y-axis?
Answer: Pounds per Square Inch of Pressure