Estimate the Mature Height of a Yearling 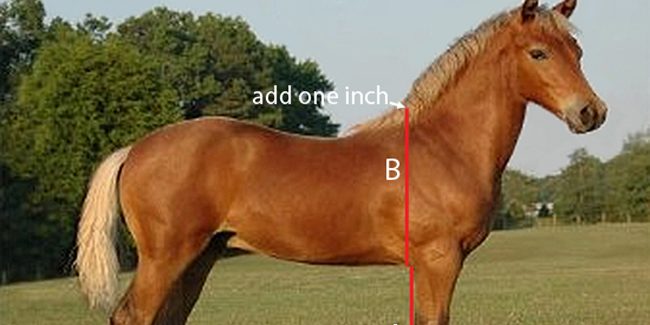 In this post you’ll learn how to estimate the mature height of a yearling. Mature height refers to how tall the yearling will be when she’s all grown up.

Math Talk – estimate: to make a close guess or rough calculation often based on rounding.

Horse Talk – yearling: a young horse of either sex that is between one and two years old.

One of the reasons this method works is that a yearling’s leg measurement is about the same as it will be as an adult. After the first year, most of a horse’s growth takes place through the body as it becomes fuller and deeper and the withers become more pronounced. 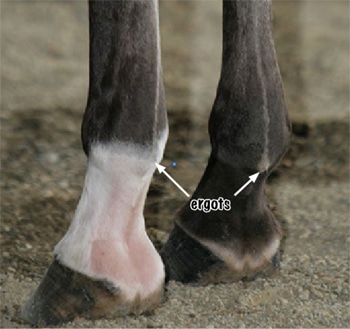 Ergots are small growths on the back of the fetlock, and are often covered by hair like on this horse. When you feel them, they feel a lot like an eraser on the end of a wooden pencil.

Step 1: Using a string or measuring tape, measure the yearling from the ergot to the elbow. Hold onto the string with your fingers to mark this length. If you’re using a tape measure, take note of the measurement.(line A above)

Step 2: Place one end of the string or tape measure at the elbow and raise the string straight up to where your fingers are marking the length you measured in step one. This is indicated as line B in the picture above. Add 1 inch and you have the yearling’s approximate mature height at the withers when she’s all grown up.

1. You’ve taken the measurements. Now it’s time to calculate the estimate. Write the math calculation described in these steps as a math sentence.

Imagine you’ve measured a yearling from the ergot to the elbow (line A) and got a measurement of 27 inches.

3. Estimate the mature height of the yearling. Give your answer in hands.

Estimating the Mature Height of a Yearling – Answers:

1.  You’ve taken the measurements. Now it’s time to calculate the estimate. Write the math calculation described in these steps as a math equation.
Answer: Line A + Line B + 1 inch = the mature height of a yearling.

2. How many inches are in a hand?
Answer: 4 inches

Common Core:
4.OA.A.3 Solve multistep word problems posed with whole numbers and having whole-number answers using the four operations, including problems in which remainders must be interpreted.
5.MD.A.1 Convert among different-sized standard measurement units within a given measurement system, and use these conversions in solving multi-step, real world problems.
6.EE.B.6 – Use variables to represent numbers and write expressions when solving a real-world or mathematical problem; understand that a variable can represent an unknown number. 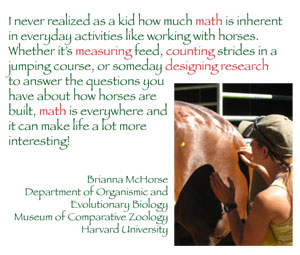