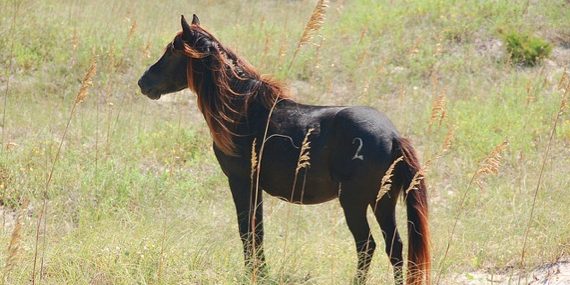 Shackleford Island is a part of North Carolina’s Cape Lookout National Seashore, and home to 118 wild horses. These horses are likely descendants of those that escaped shipwrecks in the 1500s. In 1974, Dan Rubenstein, then a Duke Ph.D. student of zoology, began a study of their social lives.

“One of the key questions that we wanted to understand better was why animals cooperate and live socially,” said Rubenstein, now chair of the Department of Ecology and Evolutionary Biology at Princeton University. “I thought if we really wanted to understand why animals would come together, we needed to look at a species where there wasn’t kinship.” Horses form groups with non-relatives, he explained. Such a system provided an excellent opportunity to learn why individuals formed groups. In horse society, both males and females leave the group they are born into for a new one. These groups, called harems, typically consist of one male and several females with offspring. Younger males form bachelor herds.

In the early years of his research, Rubenstein saw that Shackleford wild horses strayed from a typical social pattern. Usually horse groups have home ranges that they share with other groups. “But on Shackleford, because of the structure of the island, they defended territories,” Rubenstein said. Keeping a territory allowed harems to feed more “wisely,” and to ensure that food remained in winter months. If you do not finish all the grass in a patch, someone else will come and eat it, Rubenstein explained. “If you control it, you can let it recover and rotate.”

Stallions fought to maintain territories and to guard mares from other males. Rubenstein said research has shown, however, that these are not male-dominated groups. “If females don’t like the males they can vote with their feet. They can leave the group.”

The island has undergone a transformation since Rubenstein first began his research—and so has horse behavior. In 1974, only a small patch of maritime forest stood on the island. The horses shared Shackleford with feral cows, sheep and goats. In 1986, the Park Service moved to restore Shackleford to its natural state, forested, without any hoofed herbivores, Rubenstein said. They removed all sheep, goats and cows. Horses remained, as they were considered part of the region’s history.

2. How many years after the horse study began did the Park Service remove the sheep, goats and cows?

“Over time, the territoriality has been eroded on the island,” Rubenstein said, “because the physical structure of the island has changed.” As trees spread in the absence of browsers, like goats, grassland reduced. Food for horses decreased and with woodlands, males had less visual access to their territories. Over time the horses became less territorial, though males still guard their females from other stallions.

After the other feral animals were removed, the horse population lived relatively unmanaged for a decade. By 1996, more than 200 horses lived on the island, and the Park Service worried that the hurricane-plagued habitat was too fragile to support such large animals. The Park Service removed around 80 horses from Shackleford,

3. How many years were the horses left unmanaged?

The state of North Carolina passed legislation in 1998 to created a partnership: the Cape Lookout National Seashore would manage the horses jointly with the Foundation for Shackleford Horses, a nonprofit organization run entirely by volunteers.

Rubenstein, whose students continue to study the herd, said the co-management seems to be working well. The Foundation, founded in 1996, works to “To preserve and protect the Shackleford Horses and to ensure that their place in history is continued into the future.”

Currently, the horse management plan calls for a population between 110 and 130 horses. The Park Service and Foundation maintain this range by two mechanisms: removing horses for adoption, and administering contraception to mares.

In the offices of Sue Stuska, a wildlife biologist for Cape Lookout National Seashore, the names and family relationships of all the Shackelford horses are listed on a Velcro board. The Park Service adheres to a naming system initiated by Rubenstein.

“Youngsters have the first letter of their mother’s name,” Stuska said. The Park Service later began to choose names from a theme for foals born in the same year. This way, a name can tell you the age and family of a horse, she said. Dance, was one such theme, and resulted in Swing, Jitterbug and Cha-Cha. Harems on the Velcro are organized by home range, with the mid-island harems at the middle of the board. Relationships are determined by DNA analysis through blood samples during roundups and by dung samples for all new foals. Stuska tallies the numbers for each family line. This helps to determine which horses can come off the island. Less well-represented lines get to stay. In a small population, genetic diversity is extremely important. Stuska meets with the Foundation on all horse removal decisions. She spends two to three days a week out with the horses.

Stuska has a history with horses. Before working for the Park Service, she taught horse science or horse technology at community and private colleges, worked as a groom for competition animals and was a wrangler at a guest ranch in Colorado.

“Wild horses take care of themselves,” Stuska said, contrasting her current charges with her previous, domestic ones. She added that visitors sometimes seem to not understand that the Shacklefords are wild, that they should not be bothered and that they can be dangerous. “They are wild animals and feral animals and that’s the whole reason they’re here,” Stuska said. “For us to do anything that would make them less wild, that’s not the reason that they are there.”

“Here, you see horse society as it really is.”

Interested in seeing more photos and reading the original article?

Shackelford Horses by radioactv915, CC BY 2.0

Shackelford Horse by radioactv915, CC BY 2.0