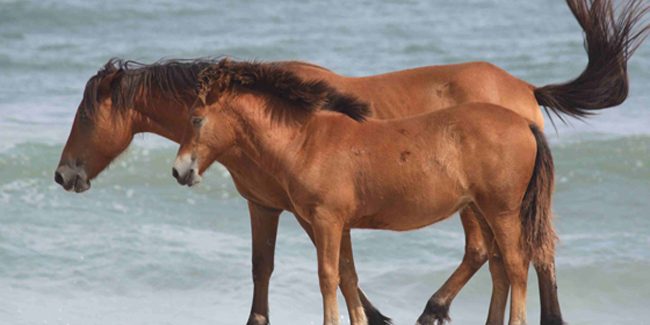 You may have already heard about the wild ponies of Assateague Island. What you may not know is that the ponies on the island are split into two main herds separated by a fence at the Virginia/Maryland State line. The herd on the Virginia side is managed by the Chincoteague Volunteer Fire Company. The National Park Service (NPS) manages the Maryland herd, on the north side of the island.

What’s involved in managing these herds of wild ponies? Sometimes, if a pony is found gravely ill, or seriously injured, measures are taken to end their suffering. As with other species of Assateague wildlife, horses that are sick or weak do not survive. This helps maintain a hardy, healthy population of wild horses. 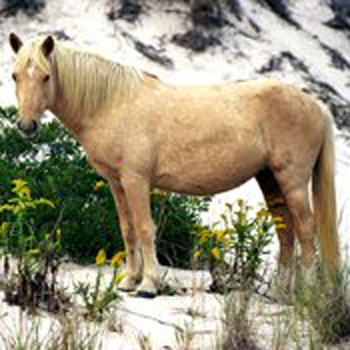 The Park Service aims to keep the population between 80 to 100 ponies. Part of what that requires is for someone to go out and count the ponies.

Have you ever wondered what it would be like to be a Park Ranger? Let’s take a look at one of their responsibilities, surveying animal populations, in this case the wild ponies of Assateague Island.

Alison Turner of the NPS, is the person charged with monitoring the pony population. She completes a horse population survey 6 times per year – in February, March, May, July, September and November.

The most recent survey, in November last year, determined several of the ponies had died. “Taffy,” the oldest mare on record on Assateague at 34, along with an unnamed mare known simply as N6G, who was 33, were classified as missing or presumed dead.

1. In what year was Taffy born?

With other losses as well, Alison found the size of the herd in the Maryland section had dropped to 88, still well within the ideal range, but—it was falling.

Alison uses a data sheet to record each horse. Below is the first page from the November survey. Each ‘Band’ is listed using the dominant stallion’s identification number. If Alison spots a lone stallion or bachelor band, she writes the word “bachelor” in the ‘Band’ column. For an unattended mare or mares, she writes,”mare”.

“Zone” refers to the approximately one-mile zone on the island where the band was seen – beginning at the inlet on the north end of the island and working south, the first one-mile section is zone 1, the next mile is zone 2, and so on. 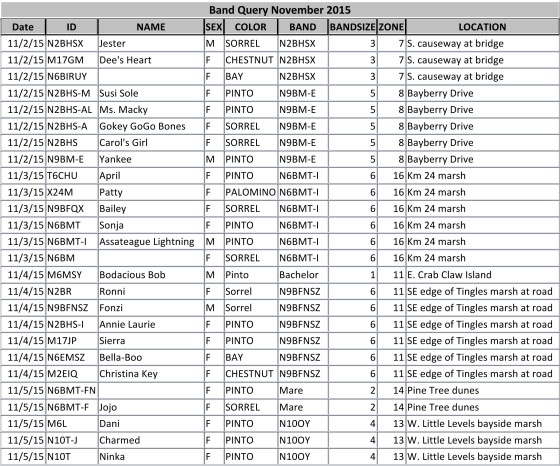 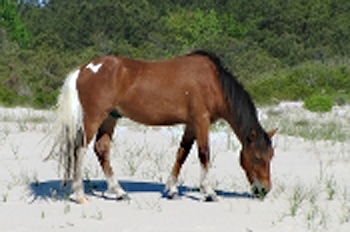 2. How many days of data are shown on the first page?

3. How many male horses did Alison count?

4. How many female horses did Alison count?

5. How many horses are in band N9BFNSZ?

6. Which other band has the same number of ponies?

7. What is Patty’s ID (identification) number?

8. In what zone was Assateague Lightning found?

9. What fraction of the ponies listed are pinto?

The last day of the survey was 11/30/15. By then Alison had four pages of data. Of the 88 ponies Alison counted, one quarter were stallions, the remainder were mares.

10. How many stallions were there?

11. What fraction of the herd were mares?

12. How many mares were there all together?

Once the survey was complete it could be used to make herd management decisions. Should the National Park Service allow more foals to be born next year?

To maintain the herd size, the NPS uses an ongoing contraceptive program for the mares on the island. Along with the natural cycle of life and death, contraceptives are used to control the number of foals born each year,

Science Talk – contraceptives: Birth control, also known as contraception and fertility control, are methods used to prevent pregnancy. In the case of the ponies on Assateague Island, mares are given an injection of the contraceptive. Assateague’s program has become a model for wild horse and other animal management programs around the country. 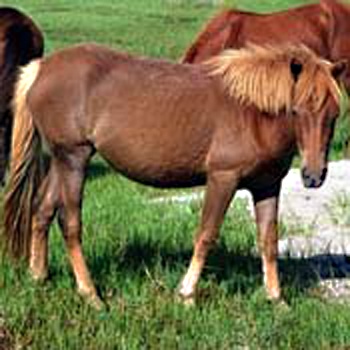 For all the math and science involved, there is no way to predict how many horses will die and how many foals will be born in any given year. If a large number of foals are born next year, several of the mares would receive the contraceptive.

On the other hand, if only a few foals are born next year, NPS officials would likely only treat the two-year-old mares, allowing them to mature a little more before having a first foal. It’s all part of taking care of the Assateague Island ponies!

Would you like to learn more about these wild ponies? Check out these Horse Lover’s Math posts!

3. How many male horses did Alison count?
Answer: 5

4. How many female horses did Alison count?
Answer: 21

6. Which other band has the same number of ponies?
Answer: N6BMT-I

8. In what zone was Assateague Lightning found?
Answer: Zone 16