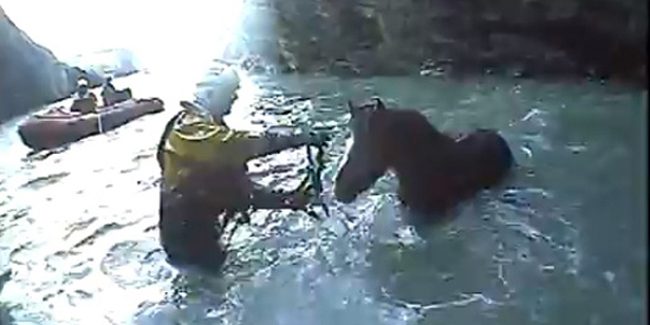 A pony that fell more than 50 feet down a cliff in west Wales was saved by lifeboat crews in a dramatic rescue.

1. Calculate the distance she fell in yards.

2. Calculate the distance she fell in metres.

It is thought that the little mare had been trapped for at least 96 hours when the two Cardigan lifeboats went to her aid.

3. How many days was she trapped?

The pony was stuck on a tiny gravel beach in a gully at the bottom of steep cliffs.

Simon Mansfield from Cardigan Lifeboat said they were called out at about 10am.

“Quite how she had got down there, nobody knows,” he said.

“She was completely trapped — the only way out was by sea. A helicopter rescue was unthinkable, it would have been far too difficult.”

Mr Mansfield and his colleagues took their smallest lifeboat as close as possible into the narrow gully, with the intention of putting a halter on the pony and swimming her out alongside the boat.

“Surprisingly she was in fine fettle, with no broken bones,” said Mr Mansfield.

“But she was absolutely petrified — I don’t think she’d been handled before and even on that small patch of beach, she gave us a run for her money.”

Once the halter was on, the pony swam alongside the boat “quite happily”.

But as they got to the shore, the rope on her halter snapped and the pony took off.

Mr Mansfield managed to grab her and was dragged across the beach. They got her into an RSPCA horsebox and she was taken away for treatment before being returned to her owner.