You are here:
FeaturedNews & Stories 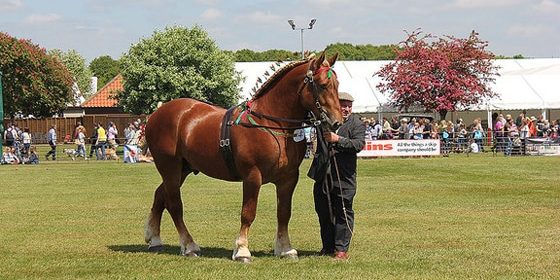 For hundreds of years, the Suffolk Punch draft horse has been used by farmers to till fields across Great Britain. Now, Britain’s oldest native breed is on the brink of extinction.

The breed was developed in the early 16th century, and still looks similar to its foundation stock. The Suffolk Punch was developed for farm work, and gained popularity until tractors took over on farms. It was then the breed fell out of favour, and now it’s almost disappeared completely.

1. To get a sense of how old this breed is, in what year did the 16th century start? 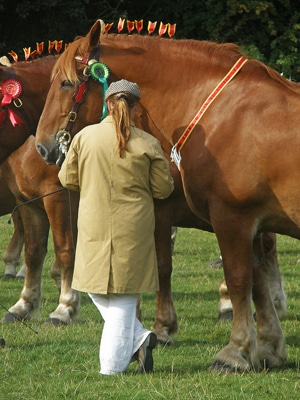 3. How many decades long is a century?

4. What is the height range of the Suffolk Punch breed in hands?

The Suffolk Punch population was at its highest during the Second World War, from 1939 to 1946, with the most new registrations in the Suffolk Horse Society stud books; over 6,000 horses registered.

After this period, the breed declined rapidly to the low point in 1966 when there were only nine Suffolk foals registered! Concerned people stepped in to try and save the breed. According to the Society, today there are around 500 horses registered in the UK.

5. Approximately how many fewer horses are registered with the Society today than when the breed was at its peak? Write your answer in word form. 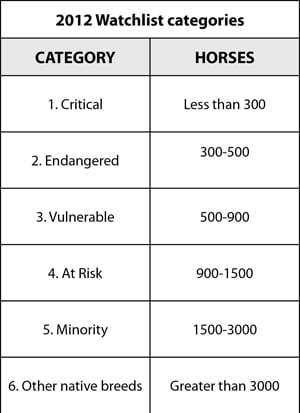 The breeds are placed into appropriate categories based on species and the total number of registered breeding females in the United Kingdom.

The Rare Breeds Survival Trust is another organization involved in securing the future of rare and native breeds of farm livestock in the UK. They keep a Watchlist showing population categories for horse and pony populations (UK only, not worldwide). The numbers showing reflect the registered number of breeding females.

By 2016, there were approximately 300 Suffolk Punches in the UK with 30 to 40 pure bred foals being born annually.

7. In which category would you put Suffolk Punch horses?

8. If 20 pure bred fillies are born annually in the UK, how many years will it take for this breed to move up to Category 2, Endangered? 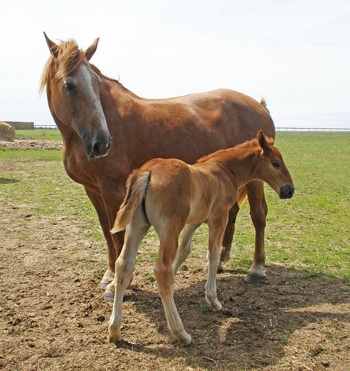 Along with less need for working horses on farms, another reason the Suffolk Punch horse is endangered is because not enough females are being born.

According to recent figures published by the Trust, just 33 fillies were born between 2014-16 – less than half the number of males during the same period.

10. Estimate the number of male foals born during the same period.

Claire Barber, from the trust, said: “They’re one of the few breeds showing small increases in their population, which is very, very positive.” This is good news. It will be interesting to watch as this beautiful, powerful breed makes a comeback!

Watch as the president of the Suffolk Horse Society talks about these rare horses.

5. Approximately how many fewer horses are registered with the Society today than when the breed was at its peak? Write your answer in word form.
Answer: 6,000 − 500 = 5500. There are five thousand five hundred fewer Suffolk Punch horses today.