The Math Behind the Magic 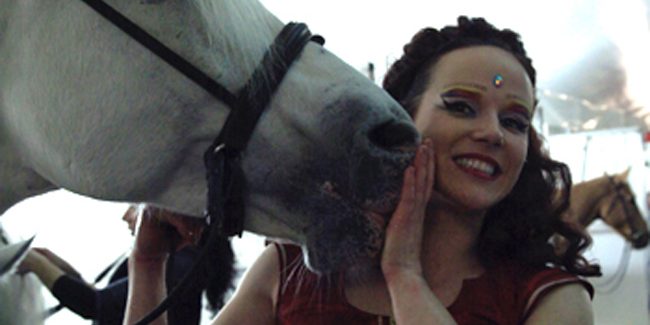 Horse Lover’s Math went behind the scenes at the Odysseo Cavalia show in Vancouver. Along with getting up close to the stars of the show – we went looking for the math behind the magic. 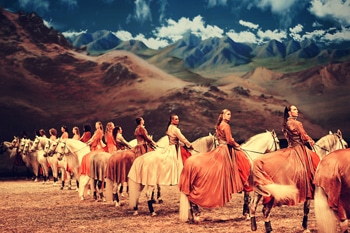 In many parts of the performance, multiple horse and rider teams are on the stage at the same time, riding patterns together, like a dance. In one scene four groups of four horses appeared on the stage.

1. How many horses were on the stage all together in this scene?

Music played as the riders came together and formed two groups with the same number of riders in each group.

2. How many horse and rider teams were in each of the two groups?

These two groups then formed one single line with the horses’ bodies parallel to each other, half facing one direction and half facing the other direction. The horses then began to move forward in a circle, always keeping the line intact, like the spoke of a bicycle wheel. The two horses at the centre of the line barely moved, taking tiny steps to keep the line unbroken.

3. Which horses in the line will travel the farthest?

4. How would you expect the speed of the horses on the outside of the line, farthest from the centre, to be affected?

Here are some of the questions kids were asking:

Sam’s Question: “How deep is the water? How do you drain the lake and where does the water go?” 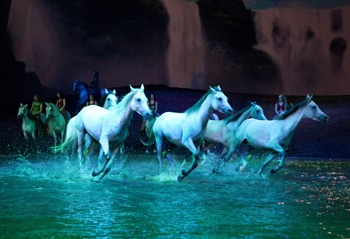 Answer: James Richardson, the technical director of ‘Odysseo’, talked about the set design, “When you watch it [the show], it feels very simple and natural, but there’s a lot of technology and engineering behind what we do.”

In the scene Sam is asking about, the stage is flooded with 80,000 gallons of water in 2 ½ minutes to a depth of approximately 4 inches. “We took about 12 months of research and testing to get it right,” Richardson says. 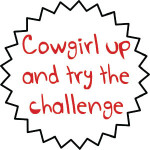 5. How many gallons of water are released in 1 minute? Write your answer in word form.

Pipes under the stage release water from four tanks. After the show, the waters drain by a system of pump, drain and filter. It’s like a giant pool system.

To give the horses enough traction so they don’t slip while running through the water, sand is mixed with fiber and plastic “to help bind it together and make it solid in the water,” Richardson says. The water is constantly monitored. “Horses love nothing more than to drink water. We have to make sure the water on stage is completely drinkable.”

6. A small sized swimming pool can hold 20,000 gallons of water. How many times more water is required to create the pool on the Odysseo stage? 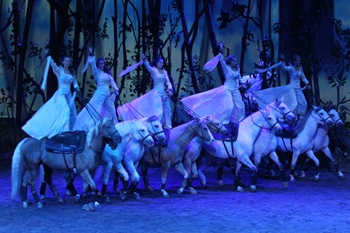 Maria’s Question:  “I love the costumes the riders wear. How long does it take to make a dress like they wear in the show?”

Answer: Costumes take a minimum 20 to 30 hours to make. For the long and colourful dresses, it can take up to 60 hours of work for each dress!

7. Assuming the dresses in the photo to the right above take 60 hours to make, how much time did it take to make all the dresses worn by the riders in this picture?

There are 350 costumes and 100 pairs of shoes and boots in the show. Artists may have up to seven different costumes. There are times in the show when an artist may have no more than 90 seconds to do a quick costume change between numbers! 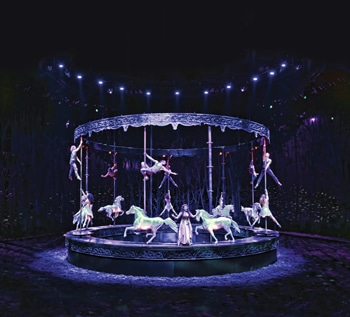 Madison’s Question: I love the merry-go-round. How big is it? How fast does it go around?

8. What is the radius of the carousel?

Math Talk – radius: the distance from the centre of a circle to its circumference.

The poles the acrobats use to climb and pose from, rotate 35 times per minute and the whole carousel can spin at 8 revolutions per minute.

Math Talk – revolutions: a revolution is one complete turn through 360º.

9. How many times will the poles rotate in 5 minutes?

10. How many revolutions will the carousel make in 5 minutes? 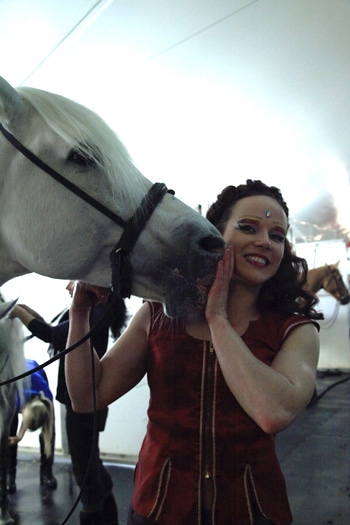 Lily’s Question: I want to ride in Odysseo when I grow up. How do I do that?

Answer: With a lot of training and passion everything is possible. Cavalia frequently has auditions and welcomes performers from all over the world.

You don’t have to know how to ride to become a part of the Cavalia team. Jobs include stable managers, sound assistant, plumber, electrician, site technician, information technology technician (people who know computers) and people who design websites. There are also the costume and set designers as well. It takes a lot of people doing different kinds of jobs to put on a show like Odysseo.

Would you like to be a part of Cavalia one day? Click here and check out their careers page!

In the meantime keep learning all you can about horses, science and math. Then when you are old enough, if you decide this is something you would like to do – you can apply for a job with Cavalia!