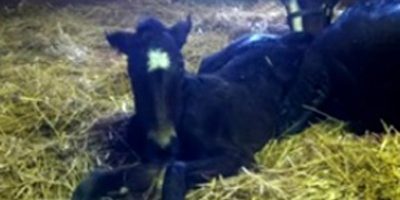 Rachel Alexandra was the 2009 Horse of the Year, the first female to receive this honour since Azeri in 2002 and just the seventh to capture that title since 1936, when official voting for Horse of the Year was established. Her racing record made history. She became the first filly to win the Preakness since Nellie Morse in 1924; only the second filly to ever win the Haskell Invitational at Monmouth Park; and the first filly to win the Woodward Handicap. She was the first 3-year-old filly to beat older males on the track since Busher in 1945. 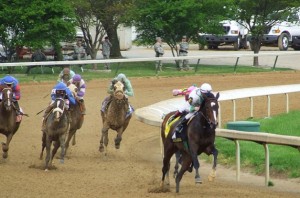 Rachel Alexandra on her way to winning the 135th Kentucky Oaks. Churchill Downs, Louisville, Kentucky, May 1, 2009.

The public loved her. Her races brought people to the track in their thousands, both those in awe of her racing ability and those charmed by a female so dominating the racing landscape. Little girls showed up at the track with “Girl Power!” signs. Her distinctive face made her instantly recognizable.

Now retired, Rachel Alexandra gave birth on January 22, 2012 to her first foal, a 125-pound colt by two-time Horse of the Year Curlin.

2. What time was it when the foal took his first steps?

3. If you live on the west coast of North America, you live in a different time zone called PST (Pacific Standard Time). When the foal took his first steps, what time was it on the west coast? PST is 3 hours behind EST.

4. Why are there different times zones?

5. The Kentucky Derby is a race for 3-year-olds. If the colt does run in the Derby, what year will he run?

6. Express the number of horses starting in the Derby as a fraction of the total number of Thoroughbred foals born each year.

Click here to see a video of her amazing run in the 2009 Kentucky Oaks. Notice how time and distance is tracked using fractions as the race progresses.

4. Why are there different times zones?
Answer: First, you know that the sun rises in the east and sets in the west. Also remember that lines of longitude go from the north pole to the south pole and that there are 24 major lines of longitude spaced 15 degrees apart around the entire sphere of the earth (24 x 15 degrees = 360 degrees).

It takes the Earth 1 hour to turn 15 degrees in relation to the sun.

Most people tend to think of the middle of the day, or noon, as being the time in which the sun is at the highest point in the sky. At that same instant, different parts of the planet will be in different positions in relation to the sun. Some may not even be able to see the sun at all.

What about even further west? Say you have a friend living in Denver, they’d have to wait two hours for the sun to rise to its highest point in the sky because Denver is about 30 degrees of longitude west from New York City.

Since the Earth rotates 15 degrees in one hour, and there are 24 major lines of longitude, it takes 24 hours, or one day for it to turn all the way around once, back to the point where the sun is in the same point in the sky.

5. The Kentucky Derby is a race for 3-year-old colts and fillies. If the Rachel Alexandra’s colt does run in the Derby, what year will he run?
Answer: The colt will run in the 2015 Kentucky Derby.

6. Express the number of horses starting in the Derby as a fraction of the total number of Thoroughbred foals born each year.
Answer: 20/30,000.